Monsuno Sight is an uncommon attribute posessed by some humans which gives them the ability to bond with Monsuno more easily than others. This includes the Monsuno Essence in the earth which can allow the user to see visions from across distances. The Monsuno Sight Keepers are descendants of the Five Tribes of Destiny.

This is a list of characters that has the Monsuno Sight.

Gallery of Characters with Monsuno Sight. 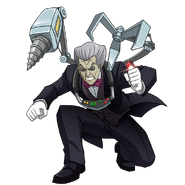 Kimi (using her Monsuno Sight)
Add a photo to this gallery
Retrieved from "https://monsuno.fandom.com/wiki/Monsuno_Sight?oldid=32633"
Community content is available under CC-BY-SA unless otherwise noted.