Alright guys, I have taken the time to rewatch and write up a summary of Episode 27 of Monsuno that had recently aired in Japan. Keep in mind, terms below reflect the Japanese version and naming conventions may be different when the episode airs in the US. There is also a major spoiler below, so I would not recommend reading if you do not wish to be spoiled.

Pictures of the episode can be found here. 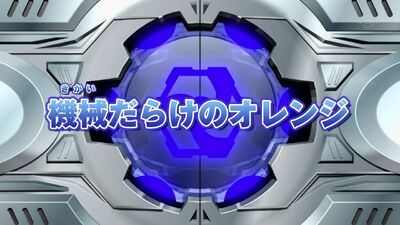 Chase and the gang begin their attack on STORM HQ in order to retrieve a device, the Wild Core Bomb. However, at the same time, another intruder amongst them makes their way in as well, stealing the device. Upon Chase reaching the room in which they would be stored, it turns out to be a bust. Jeredy, concerned it might be a trap, orders the gang to retreat. The man who had stolen the device, reports in that had retrieved it.

Later, the gang regroups and Jeredy explains to them that the device that they had been searching for an extremely powerful Wild Core bomb, in which he describes it as “The devil’s technology”, in which he had help develop during his time in STORM. Ash (Dax) comes over and reveals an empty STORM outfit that Airswitch had discovered, leading the group to believe that they had been tricked into attack the headquarters.

The group decides to track down the person who gave them the information, known as Drez, and it leads them to a ghost town. Here, they find him homeless and paranoid in a tent, in which Jeredy notes he was an “Odd fellow”, which Vicky retorts saying Bren is the odd one. However, upon Chase asking if he is Drez, he assumes that he is Jeredy, but “much younger”, assuming time had gone backwards. Vicky and Ash seem to believe he’s not right in the head and that there is no way that he could have tricked them.

However, Drez realizes Chase has a blue core, and goes to reach for it, freaking out about “Blue is alright, but Orange is bad”. Chase responds by asking if he had seen Orange Core, to which he reveals that he has and they’re known as “Forge Cores”. He describe them as the “Devil Spinners”, and reveals the guy who has been behind them has one of them.

The unknown enemy, part of Forge, attacks the group with his Monsuno, Vicegrip. Vicky and Ash release Charger and Airswitch, but are quickly defeated by the unknown enemy. Soon after, he retreats, but not before his companies capture Drez and run off on another direction. The gang split up to give chase to the mysterious gang, and end up finding them at an abandoned Train Station building. The group rushes in to rescue Drez, but it’s revealed that it’s a trap, as the group slowly comes out from hiding, singing a haunting tune, “Team Core-Tech, let’s play!”.

Here, they attack Core-Tech and unleash their Monsuno. Chase and the others unleash their Monsuno in response, and at first are at the losing end. However, soon the gang gets the upper hand and things seem to be going good for them. However, Drez finally unveils his true colors and tells him everything was a trap and attacks Chase and the others, with a Monsuno loaded in a launcher, known as X-100.

The group, barely able to survive the onslaught of the new Monsuno, Noah quickly reacts by having his Monsuno unleash it’s attack “Shining Nova”, blinding the enemy and having them escape quickly. Once they escape, Drez contacts to their leader and is told to proceed to the next phase, by unleashing the Wild Core Bomb onto the ghost town, hoping to also kill Chase and the others along with it.

Forge escapes into the sky, while Chase and the others are bewildered for a moment, Chase quickly discovers the bomb and his quick thinking has the group escape to the sky with their Monsuno.

The group morn Quickforce’s death and look upon the destructive power that the bomb had left behind. Meanwhile, the members of Forge are told to take the remaining Wild Core Bombs and cause chaos and destruction amongst the world.

Below is a video of the Quickforce scene. No subtitles are available right now, as well as no English version, as the episode will not air until April 21st.

Retrieved from "https://monsuno.fandom.com/wiki/User_blog:Mendinso/Monsuno_-_Episode_27_Summary_%26_Pictures_(Major_Spoilers)?oldid=21197"
Community content is available under CC-BY-SA unless otherwise noted.